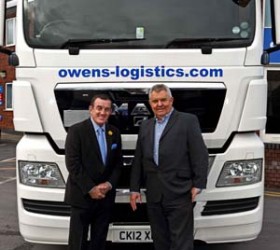 Four decades in the driving seat

on Dec 21, 12 • by admin • with Comments Off on Four decades in the driving seat


During its lifetime Palletforce member Owens Road Services has grown from a one van light haulage operation into a major UK player running more than 200 vehicles from six strategic locations. Brothers Huw and Eurof Owen set up the original business in Llanelli in the early seventies carrying furniture, kitchens and...
Pin It

During its lifetime Palletforce member Owens Road Services has grown from a one van light haulage operation into a major UK player running more than 200 vehicles from six strategic locations. 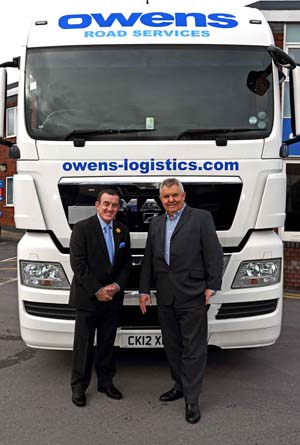 Brothers Huw and Eurof Owen set up the original business in Llanelli in the early seventies carrying furniture, kitchens and piano parts.

Now in 2012 the company, known by its more familiar name, Owens Road Services Ltd, is proud to be celebrating its 40th anniversary.

Over the decades Owens has grown steadily, joining Palletforce in 2001 while its traditional customer base of steel/automotive and construction has been supplemented with a move into warehousing and distribution incorporating supermarket and FMCG market sectors.

“Being part of Palletforce complements our general haulage expertise and allows us to offer a more comprehensive, flexible service to our customers,” said Huw Owen, Managing Director.

“The strength, quality and national coverage of fellow members in the Palletforce network has a positive effect on our business by enhancing our own brand.”

Today the company has depots in Llanelli, Port Talbot, Bridgend, Newport, Droitwich and Wrexham, employs 500 people and has a modern fleet of which more than 60 per cent is less than a year old.

As well as being the year Owens Road Services Ltd was established, 1972 is also an important year in Llanelli’s sporting history as the Scarlets rugby club racked up a famous 9-3 win over the New Zealand All Blacks.

The joint 40th anniversaries presented the perfect opportunity for the two organisations to work together, and in October Owens Road Services sponsored a celebratory dinner commemorating the Scarlets’ triumphant match.

“In common with the rugby club, Owens as a company has had to adapt to an ever changing environment,” said Huw.

“We’ve had the good fortune to grow from our base in Llanelli into a company whose group sales are now more than £50m a year.

“Over the past four decades the Owens business has experienced consistent growth and the blue livery branded vehicles have become a familiar sight along the M4 corridor and beyond.”

Palletforce Chief Executive Michael Conroy said: “Four decades in such a competitive industry is a magnificent milestone to reach and shows what can be accomplished with hard work and attention to customer service.

“I congratulate everyone at Owens Road Services on their efforts to sustain such success over the decades and look forward to future continued prosperity.”

Four decades in the driving seatPalletforce