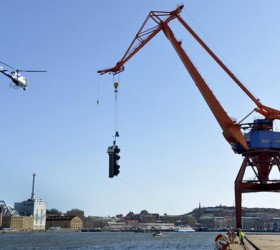 on Sep 2, 13 • by admin • with Comments Off on Volvo Truck president plays role of stuntman


Claes Nilsson is President of Volvo Trucks and yet he does not hesitate to stand on a truck dangling more than 70 feet up in the air as he stars in a film in which Volvo’s new construction truck is put to the test. “Yes, I have to admit I had butterflies in my stomach [&hellip...
Pin It

Claes Nilsson is President of Volvo Trucks and yet he does not hesitate to stand on a truck dangling more than 70 feet up in the air as he stars in a film in which Volvo’s new construction truck is put to the test. 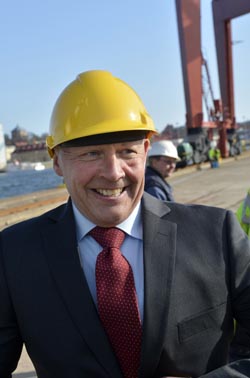 “Yes, I have to admit I had butterflies in my stomach and I certainly wondered more than once what I’d let myself in for ! I’m no mountain-climber and I don’t like heights, but I’d promised to do the stunt, so I couldn’t very well back out,” says Claes Nilsson.

Claes had to spend almost two hours standing on the front panel of a Volvo FMX construction truck that had been hoisted more than 70 feet above the water in Gothenburg harbour.

“Of course filming is a time-consuming process and there were many retakes. It was fairly cold – about 8 degrees above zero – and the wind was blowing about 25 mph, so my hands got pretty cold after a while. But it all went very well and, as safety was paramount, I was never really afraid,” continues Claes Nilsson.

“The idea behind the film – called “The Hook” – is that we wanted to show that the truck’s front towing hook is dimensioned to handle far greater stresses than those to which it is normally subjected. It’s all about spotlighting the strength and quality of our construction trucks,” explains Claes Nilsson, adding “And you can’t do that more clearly than by hoisting the 15-tonne truck up into the air via its own towing hook.”

The film was shot from a helicopter, so everything had been prepared in advance down to the tiniest detail.

“The difficulty is to shoot the entire film in one take from a helicopter. I’m really impressed by Claes Nilsson, who stayed cool and focused throughout the two hours he was hanging in the air. I tried it myself, but just for 15 minutes, and it was pretty scary I can tell you,” says Filip Nilsson of Folke Film, who directed the film. 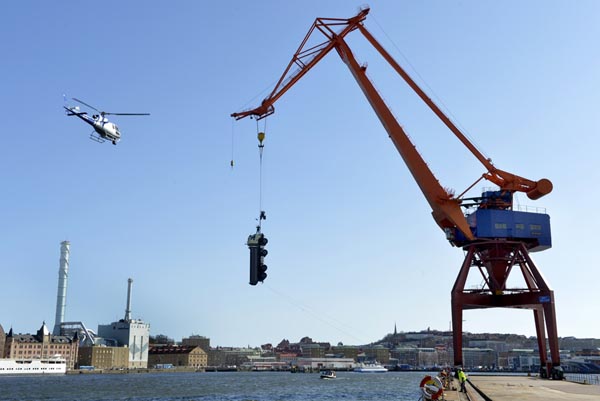 This is not the first time Volvo Trucks has filmed spectacular tests featuring their trucks. ‘The Ballerina Stunt’ was a viral success globally when it appeared on the Internet in August last year. Today over 7 million people have seen the film on YouTube in which Faith Dickey balances on a slackline between two trucks driving on the highway at full speed. The aim in that film was to demonstrate the improved stability and steering of Volvo’s new long-haul FH truck.

“Since then we’ve introduced another four new truck models. Our plan is to subject them to a variety of tests in the upcoming months, all with the aim of demonstrating the improved characteristics of each model. These are not any run-of-the-mill tests we’re doing – I can assure you that nobody in the truck world has ever done anything like this before,” concludes Claes Nilsson.