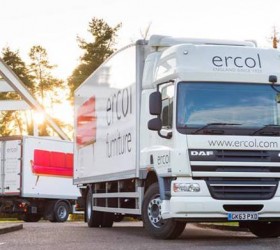 
Furniture manufacturer ercol is renowned for the stylish design, practicality and quality of its products – no surprise then, that the four new trucks it has just set on the road are fitted with streamlined Bevan21 bodies. Based on DAF CF chassis, the eye-catching 18-tonners are the subject of a contract hire...
Pin It

Furniture manufacturer ercol is renowned for the stylish design, practicality and quality of its products – no surprise then, that the four new trucks it has just set on the road are fitted with streamlined Bevan21 bodies. 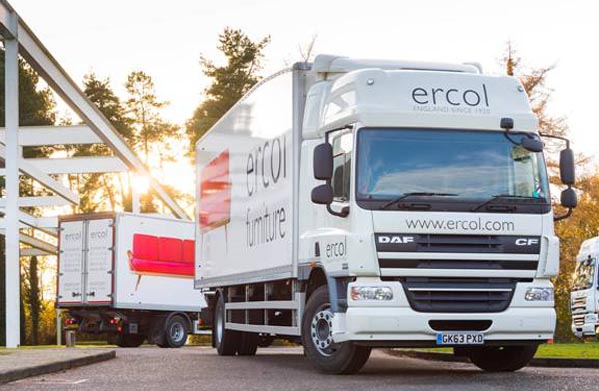 Based on DAF CF chassis, the eye-catching 18-tonners are the subject of a contract hire agreement with established partner Sunrent, under which each will cover 75,000km a year.

They are now distributing furniture from ercol’s production facility in Princes Risborough, Buckinghamshire, to retailers nationwide – as well as ‘independents’, the company’s impressive customer portfolio includes leading names such as Furniture Village, the John Lewis Partnership and The White Company.

The body of choice for some of the biggest fleet operators on Britain’s roads, the Bevan21 is designed to reduce wind resistance while maintaining cubic load volumes, with features including a curved roof, specially moulded air deflector and cab collar.

Independent tests carried out under stringent conditions have confirmed that the streamlined Bevan21 – which is also available as a curtainsider – is capable of cutting fuel bills by more than 15 per cent.

ercol’s new bodies were manufactured at Bevan’s production facility in Halesowen, West Midlands. They offer a weight saving of almost 1,000kg compared to the demountable boxes employed on the vehicles that ercol has been running for the last five years.

ercol was founded in 1920 by a young Italian immigrant, Lucian Ercolani. The environmental compatibility of the company’s new truck bodies complements its commitment to eco-friendly business practices – the biomass boiler that heats its energy efficient factory is fuelled by wood waste, while it also applies water- rather than solvent-based finishes when making furniture in its modern factory.

ercol switched to fixed bodies following consultations with Sunrent. The Kent-based contract hire specialist has a rental fleet of more than 500 commercial vehicles, ranging from small vans to 44-tonne tractor units, and prides itself on its ability to evaluate a prospective customer’s distribution operation then recommend a more cost-effective way to get the job done.

Sunrent Director Jason Saunders recalls: “We realised that while it made good business sense for ercol to specify its previous vehicles with demountable boxes because its manufacturing and distribution operations were then on different sites, the fact that they had since moved to the same location meant this no longer applied.

“So having gone through the figures with Bevan, a highly professional bodybuilder with which we’ve worked on many occasions, we recommended to ercol that it switch to lighter, more aerodynamic Bevan21 bodies, These offer higher payload capacities and should also deliver some worthwhile mpg savings.”

ercol’s Transport & Logistics Manager Malcolm Mullett confirms: “In terms of build quality these new Bevan bodies represent a huge step forward for us. They also look fantastic on the road, which is important given our company’s design-led ethos.”

He continues: “Sunrent have been a good partner and we’re delighted that they introduced us to Bevan Group. We visited the bodybuilder’s factory in the West Midlands, talked through the specification and were very impressed.

“We’ve shed as much weight as possible – for example, the new trucks have standard 24mm GRP panels instead of the previous 28mm thickness, and side-hinged rear doors rather than heavier roller shutters – but without compromising strength and structural integrity.

“This, coupled with the fact that we’re no longer using the demount system, means our Bevan-bodied vehicles are the best part of a tonne lighter than their predecessors, despite having higher, heavier cabs.

“Their combination of increased payload capacity and aerodynamic efficiency is already contributing to the increased cost-effectiveness of our distribution operation.”