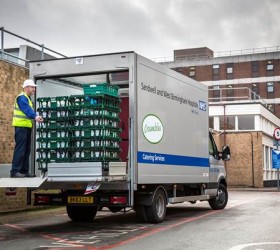 on Feb 23, 14 • by admin • with Comments Off on Schmitz Cargobull chooses Bevan

Hospital patients in the Black Country are enjoying nutritious meals delivered with greater efficiency, following the introduction of a new truck with refrigerated bodywork by local specialist Bevan Group. 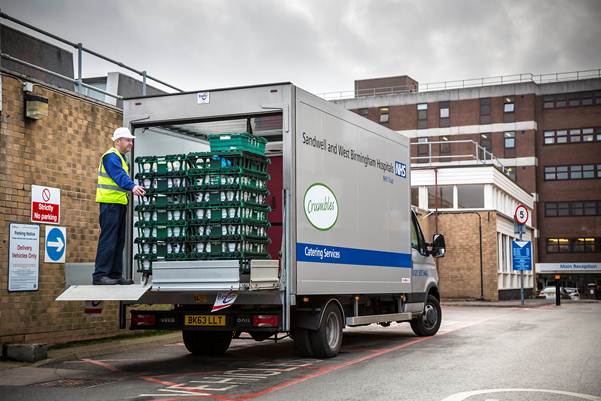 The 5.0-tonne Iveco Daily has replaced two smaller vehicles previously operated by Sandwell & West Birmingham Hospitals NHS Trust, and has the capacity and flexibility to do the work of both.

Since the new truck entered service, the Trust has been able to stand down its two older vehicles, bringing a valuable saving in operating costs and reducing its carbon footprint.

Transport Manager Stephen Billingham explains: “We provide meals for patients and staff at three hospitals and a clinic, and our previous vehicles were running at full capacity.

“The new truck offers a higher payload allowance and Bevan’s insulated body is significantly larger, as well as being much more adaptable.

“Each of the bodies on our previous vehicles was split into two, fixed compartments, so we could carry frozen and chilled items at the same time. But the new one has a removable bulkhead, which gives us the flexibility to divide the space or operate at a single temperature.”

The truck is now delivering meals from a central depot, where they are cooked from fresh and then frozen, to Sandwell General Hospital, City Hospital in Birmingham, Rowley Regis Community Hospital, and Leasowes Primary Care Centre, Smethwick – facilities which between them have beds for more than 1,000 patients.

Mr Billingham adds: “We already had a good working relationship with Bevan, whose excellent Aftercare team maintain the bodywork and tail lifts on our other fleet vehicles. So when we heard they had begun building temperature-controlled vehicles, we were keen to find out more.

“Bevan worked with us on the design of the body and the result is a vehicle perfectly tailored to our needs, with excellent build quality. It’s also comforting to know that we can call on Bevan’s Aftercare team at short notice, should the need arise.

Schmitz Cargobull is best known in the UK for its refrigerated semi-trailer product line, while Bevan’s expertise is in the manufacture and marketing of all types of dry freight bodywork. The co-operation between the two companies, which began in January 2013, offers operators of temperature-controlled distribution fleets the guarantee of high quality rigid reefer bodies backed-up by industry leading aftercare.