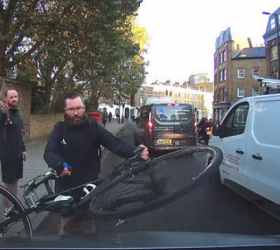 on Oct 25, 18 • by admin • with Comments Off on Road rage cyclist caught on SmartWitness


This is the shocking moment a brazen cyclist uses his bike to attack a £56,000 Mercedes limousine after a road rage bust-up in Central London. SmartWitness dashcam footage shows the bearded cyclist angrily remonstrating with the chauffeur at the side of the road and aggressively jabbing his finger in his face. As the...
Pin It

This is the shocking moment a brazen cyclist uses his bike to attack a £56,000 Mercedes limousine after a road rage bust-up in Central London. 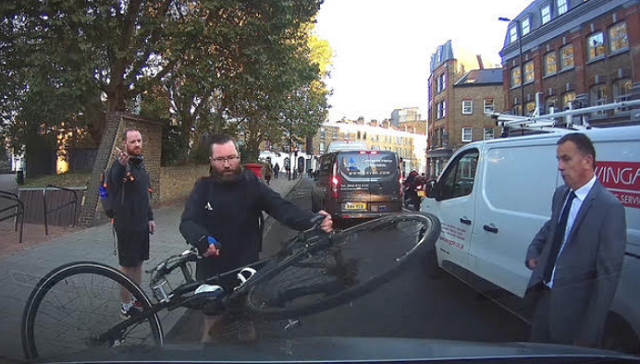 SmartWitness dashcam footage shows the bearded cyclist angrily remonstrating with the chauffeur at the side of the road and aggressively jabbing his finger in his face.

As the besuited chauffeur returns to his Mercedes V-Class MPV, the cyclist lifts up his bike and smashes the pedals across the bonnet of the people carrier.

The chauffeur then runs back to his car to alert police and the cyclist rides away – leaving three deep scratches to the bodywork which cost £1,500 to repair.

The incident happened in busy rush hour traffic on September 27 in Marshalsea Road, Borough, and is one of an increasing number of cycle rage incidents across the UK.

The footage has been released by SmartWitness, the UK’s leading vehicle CCTV firm, following calls for bicycles to be fitted with number plates so that illegal cyclists can be more easily identified.

The chauffeur immediately reported the incident to the Metropolitan Police who are investigating.

He is hoping that going public with the footage will identify the culprit so he can be prosecuted.

The chauffeur, who declined to be named for fear of further reprisals from cyclists, said: “It is crazy that cyclists can vandalise a vehicle in this way and then cycle away scot-free.

“He needs to be named and shamed to send a clear message to cyclists that this behaviour is completely unacceptable.

“Cycle rage is an epidemic in London at the moment – I am subject to threats virtually every day.

“All taxis and limousines needs to fitted with vehicle cameras to protect them from this menace.”

The row started after the cyclist accused the Mercedes driver of impeding him as they crossed a busy intersection next to Borough Tube Station.

The cyclist shouts at the chauffeur as they move away and bangs on the side of his limousine with his fist which can clearly heard on the video.

At this point the driver pulls over because he fears the cyclist has damaged his MPV by banging on the side and wants to check for damage.

The cyclist gets even more aggressive when they stop – pointing his finger in the chauffeur’s face and shouting at him in front of a pedestrian.

When the chauffeur returns to his vehicle, the cyclist picks up his bike, lifting it up so the pedals are above the bonnet, and slams the bike down and across the bodywork, causing three large and deep scrapes that go right through the paint to reveal the bare metal beneath.

The video shows the chauffeur rushing back to his car to get his phone to call the police but when he returns the cyclist has made off into the traffic and has not been seen again.

The chauffeur works for a premium limousine service that insists that its drivers’ vehicles are in perfect condition and he had no choice but get immediate repairs costing £1,500.

Paul Singh from SmartWitness which makes specialist evidence cameras for taxi drivers and chauffeurs said: “We are seeing a huge increase in road rage incidents involving cyclists. Taxi drivers and chauffeurs know they have to protect themselves with video footage to prove they are not at fault and to provide evidence of criminal damage which is highlighted in this case.

“Due to the high resolution video footage the chauffeur has been able to prove he was not at fault to his insurer and claim back the cost of the repairs.

“It is to be hoped that publicity surrounding this case will identify the cyclist so that he can be prosecuted. He is clearly a danger to other road users.”

A Metropolitan Police spokesperson said they are investigating the incident and they had been provided with the dashcam footage by the chauffeur. So far, no one has been arrested.

Sussex Police and Crime Commissioner Katy Bourne has said cyclists should have the same identification as drivers so they can be prosecuted for offences such as jumping red lights.

The Department for Transport is currently conducting a review into whether to update road safety laws which could include new penalties for dangerous cyclists.