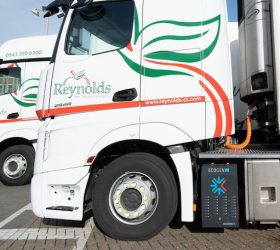 Reynolds gets greener with Hultsteins

on Nov 7, 22 • by admin • with Comments Off on Reynolds gets greener with Hultsteins


The UK’s only remaining family-run national greengrocer is primed to cut emissions and boost fuel economy courtesy of Hultsteins. National food service provider Reynolds – which began as a greengrocer in Hackney in 1945 and remains under family ownership – has taken delivery of five Mercedes-Benz Actros...
Pin It

The UK’s only remaining family-run national greengrocer is primed to cut emissions and boost fuel economy courtesy of Hultsteins. 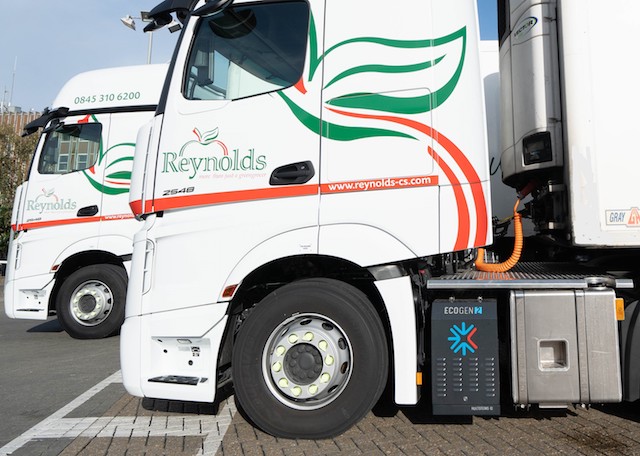 National food service provider Reynolds – which began as a greengrocer in Hackney in 1945 and remains under family ownership – has taken delivery of five Mercedes-Benz Actros tractor units fitted with Hultsteins Ecogen 2 refrigeration systems.

The company operates a fleet of 220 vehicles, comprising 30 vans and 190 HGVs, along with 21 trailers, all of which are refrigerated. It runs a hub and spoke operation from its headquarters and national distribution centre in Waltham Cross, Hertfordshire, delivering to eight depots throughout the country, followed by last-mile deliveries.

As part of its efforts to improve sustainability – which have so far included investing in electric vehicles and a zero-carbon farm – the firm is cutting the emissions of its transport refrigeration units (TRUs) and slashing diesel costs with the Ecogen 2 systems.

“I was familiar with Hultsteins and I liked the other products, such as the Slimline hydraulic refrigeration system,” says Steve White, Reynolds’ Head of National Fleet, “when I was looking at bodybuilding spec for new vehicles, I spoke to them again and had a look at the Ecogen units.”

The Ecogen 2 system can be retrofitted to any tractor unit with an engine power take-off and converts existing diesel TRUs to run on electricity. It generates 400 volts and connects to the fridge motor via a five-pin plug. As well as adapting TRUs to emissions-free power, the Ecogen system represents a highly cost-effective method for operators to adopt cleaner refrigeration systems, because there is no requirement to replace existing trailers or TRUs.

“We’ve got 17 frontline trunking HGVs, so we decided that, on renewal, we would fit the Ecogen system to five Mercedes-Benz Actros tractor units, which are on contract hire from NRG Riverside,” adds Steve, “obviously, there was the removal of the red diesel subsidy on 1 April this year, so that was a big incentive for us from a fuel-saving perspective, but we also have a series of sustainability projects and a plan to reduce our overall carbon footprint, so I felt it was a good product to trial.”

The tractor units have entered service with Reynolds and Steve conservatively estimates that each Ecogen 2 unit will save at least £5,000 per year in diesel costs and more than 1,900kg of CO2 per annum.

“The gameplan is to convert the entire HGV fleet to Ecogen 2 units because, from an emissions point of view, it’s the way forward – and we can reduce our fuel bill,” he adds, “if you look at the payback, it’ll take about two to three years to cover the cost of the units, and there are additional benefits, such as shouting about the fact that we’re a sustainable company adopting clean, technologically advanced equipment.”