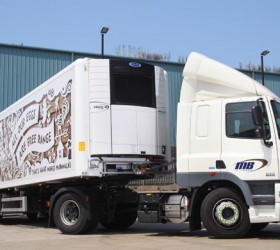 on Aug 6, 13 • by admin • with Comments Off on Martin Brower chooses Carrier Transicold

Carrier Transicold UK has secured an order for 30 Vector™ 1950 MT (multi-temperature) units and eight Supra™ 950 MT units from Martin Brower UK. The new equipment will be used to deliver a mixture of ambient, chilled and frozen produce to restaurants nationwide. Carrier Transicold helps improve global transport and shipping temperature control with a complete line of equipment for refrigerated trucks, trailers and containers, and is a part of UTC Climate, Controls & Security, a unit of United Technologies Corp. (NYSE: UTX). 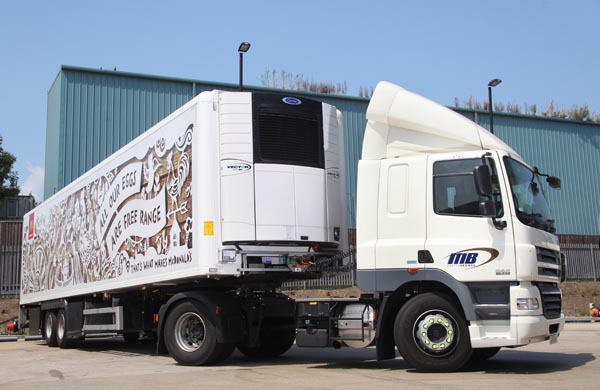 The order marks the first of Carrier Transicold’s latest generation Vector 1950 MT systems to enter the Martin Brower fleet, mounted to multi-compartment trailers manufactured by Gray & Adams. They will operate from three distribution centres in Heywood, Hemel Hempstead and Basingstoke, clocking-up more than 4,000 hours of operation on the road per year. When parked at a distribution centre, each unit offers plug-in electric-standby capability.

Compared with the previous generation Vector 1850 MT unit, the latest Vector 1950 MT system offers a 4 per cent increase in refrigeration capacity for a total of 18,800 watts. This ensures faster pull-down and the ability to haul larger loads over long distances, whilst its condenser is smaller and lighter than its predecessor, providing even greater efficiency.

“We’ve had a long and successful relationship with Martin Brower. They continue to specify Carrier Transicold units as they know that our technology is well suited to their high fleet utilisation, which demands robust and reliable refrigeration systems,” said Justin Grace, managing director Northern Europe, Carrier Transicold UK.

The Vector 1950 MT unit’s new microchannel coils also contribute to reducing fuel consumption by approximately 10 per cent. The use of microchannel coils enables a compact design that results in a 17 per cent reduction in the unit’s refrigerant charge.

Like its predecessor, all Vector 1950 MT units are equipped with Carrier’s patented E-Drive™ all-electric technology, which remove mechanical transmissions found in conventional belt-driven systems and transforms engine power into electricity through a generator. This power method ensures precise temperature control to within +/- 0.3 degrees Celsius of the set point, for maximum load protection.

Supplied on contract hire by Centurion Truck Rental Ltd, the trailers are joined in the fleet by eight new DAF CF65.250 rigid trucks, each mounted with Gray & Adams refrigerated box bodies and Supra 950 MT units. These vehicles complement a fleet of more than 300 assets and are designed for locations which cannot be accessed by articulated vehicles, such as narrow city streets or shopping precincts with underground unloading areas.

For more information on Carrier Transicold and its products and services, visit www.transicold.carrier.com. Follow Carrier on Twitter: @carriergreen.