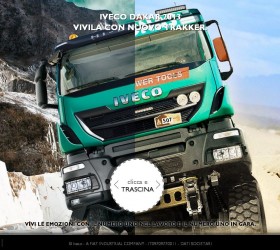 
Iveco is preparing to compete at Dakar 2013 with a squad of five rally trucks. Considered the world’s premiere off-road rally, the Dakar challenges teams over some of South America’s most difficult terrain. Current Dakar champion Team De Rooy will drive one Iveco Powerstar and four Iveco New Trakkers along the...
Pin It

Iveco is preparing to compete at Dakar 2013 with a squad of five rally trucks. Considered the world’s premiere off-road rally, the Dakar challenges teams over some of South America’s most difficult terrain.

Current Dakar champion Team De Rooy will drive one Iveco Powerstar and four Iveco New Trakkers along the route which starts in Peru, before crossing through Argentina and ending in Chile. Team De Rooy and Iveco will face this exciting and extreme race together, defending their impressive victory in 2012.

In anticipation of the upcoming rally, Iveco has launched a new project named “You are in the Dakar,” in collaboration with Radio Deejay, a popular Italian radio station, and Deejay TV. Through this initiative, an extreme sports journalist and blogger named Gross and Radio Deejay’s very own DJ Vic will report on the high profile event throughout race.

Gross will act as the official voice of Team Iveco and its drivers (Miki Biasion, Gerard De Rooy, Hans Stacey, René Kuipers and Jo Adua) following each stage of the race and will send daily updates to http://dakar.iveco.com/en. A filmmaker will accompany him, recording a Dakar-Iveco documentary about the race, vehicles and drivers along with behind-the-scenes footage from the team’s camp.

DJ Vic will also recount stories sent by Gross to Radio Deejay’s listeners. Videos from the preparatory phases will air from 21-25 January 2013 on Occupy Deejay, one of Deejay TV’s most popular programs.

The website http://dakar.iveco.com/en is already live and will be updated on a daily basis, showing the latest race results and performance stats for Team De Rooy. Photos and video footage sent from South America will also be posted online.

The design of the website is divided into two sections. This idea reflects the two sides of an Iveco Trakker, a heavy vehicle that is ideal for both daily on/off-road transport applications, as well as extreme off-road situations such as the Dakar. The first section of the website profiles the New Trakker by showcasing its technical specification and highlighting what makes it stand out from the competition. The second section of the website is dedicated to the Dakar with a countdown to the rally’s start. All stages of the race are listed along with a dedicated Team area, complete with biographies on the five competing drivers.

Dakar represents a great opportunity for Iveco to test the performance and reliability of its products over some of the most extreme off-road conditions any vehicle will ever face. Each of its trucks will be put to the test in extraordinary circumstances as they cross three of South America’s largest countries, with the rally being held over more than 8,000 kilometres.