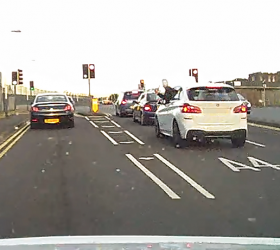 on Feb 16, 17 • by admin • with Comments Off on Dramatic VisionTrack dashcam footage captures road rage bust-up


Dramatic VIsionTrack dashcam footage captures a road rage bust-up after a fleet driver’s windscreen is smashed when he is pelted with a plastic bottle by passenger travelling in a BMW. The pair were involved in a bust-up as they approached a junction close to Heathrow Airport. A bearded man in his 20s...
Pin It

Dramatic VIsionTrack dashcam footage captures a road rage bust-up after a fleet driver’s windscreen is smashed when he is pelted with a plastic bottle by passenger travelling in a BMW. 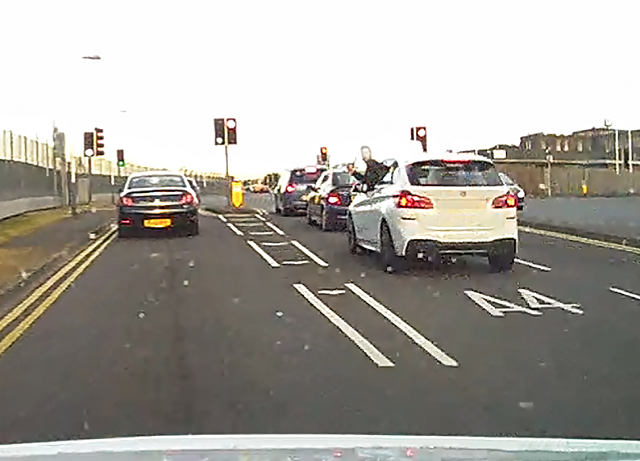 The pair were involved in a bust-up as they approached a junction close to Heathrow Airport. A bearded man in his 20s travelling as a passenger in a white BMW leans out of the window and hurls a two-litre bottle of water at the windscreen of the fleet driver.

The bottle shatters the bottom of the fleet driver’s windscreen, obscuring his vision as the water splashes across the screen.

The BMW shot off afterwards but the badly-shaken victim has made the footage available to police to deter other road rage drivers by showing how their behaviour can be caught on camera.

The footage was released by the one of the UK’s leading dashcam firms, VisionTrack.

It was captured on the  VT2000 camera, its best-selling camera for fleet drivers. All the footage is court admissible.

New figures have revealed a surge in road rage incidents on Britain’s roads.

A third of drivers say they have been involved in a road rage incident – and a fifth of them say the encounters have led to violence.

There has been a 70% rise in the number of incidents in the last five years.

More than a seventh (15%) who have experienced road rage say they have been involved in ten incidents or more – suggesting there is a group of motorists such as this passenger who cannot control their rage when they are travelling in a vehicle.

VisionTrack managing director Simon Marsh said: “Road rage incidents are rapidly increasing as Britain’s roads become more congested.
“There is a significant number of motorists who are a danger to themselves and other drivers.

“They react to minor altercations in a way they simply wouldn’t if they were not behind the wheel of the car and they try to bully other drivers.

“A great way for fleets to protect themselves from road rage thugs like the passenger in this footage is by fitting a dashcam to your vehicle.
“We have released the footage because drivers who endanger other motorists should be aware their actions can be caught on camera and they can be held accountable. This can only help to improve road safety.”

The road rage data came from Freedom of Information data obtained from 15 police forces across the UK. One reason for the surge in incidents is the increased volume of vehicles on Britain’s roads. Traffic is at its highest ever levels with vehicles travelling 318 billion miles in total each year.

The main reason for the record traffic levels is a sharp increase in vans – most for deliveries. Traffic has never been slower with A roads in the morning at peak times averaging 23.4mph across the country, and just 15mph on London A roads.

VisionTrack’s sales have risen by 40% in the last year as increasing numbers of fleets invest in dashcams to protect themselves against road rage incidents and cash-for-crash fraudsters.

Fleets which invest in the technology find that their insurance can come down due to improved driving performance and greater evidence in the event of an insurance claim.

Marsh added: “The best way to protect your no claims is to invest in a dashcam. The camera never lies and footage provides the ultimate protection in the event of a disputed claim where you are the innocent party.

“It is worth investing a decent camera like VisionTrack’s VT2000 because only these provide court admissible footage.”

For more details about VisionTrack cameras, ring 01246 225745 or go to www.visiontrack.com