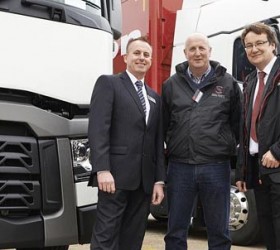 on Jan 15, 14 • by admin • with Comments Off on Cowern Transport chooses Renault


Road haulage and pallet distribution specialist, Clive Cowern Transport Services, is taking delivery of three Renault Range T 460.25 tractor units into its Scania-dominated fleet. The Range Ts are supplied by Renault Trucks Midlands, on a two year contract hire deal through BRS Ltd., one of the UK’s leading...
Pin It 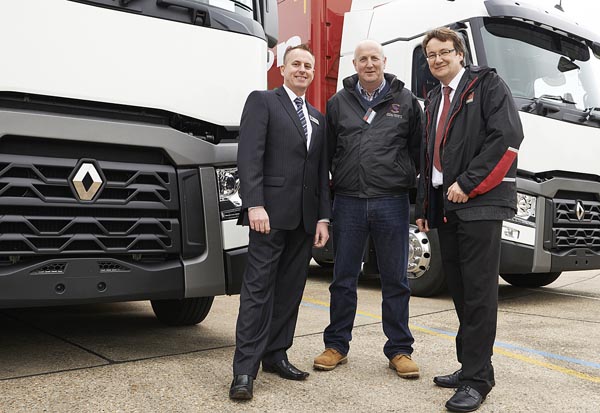 The Range Ts are supplied by Renault Trucks Midlands, on a two year contract hire deal through BRS Ltd., one of the UK’s leading suppliers of commercial vehicle contract hire solutions, and will go on the road in early 2014.

Joining Clive Cowern Transport’s 44-strong mixed fleet, the three Range Ts will operate out of the company’s Bridgnorth site undertaking general haulage and covering up to 140,000km per year. The decision to select the Range Ts follows Managing Director Clive Cowern’s visit to the Renault Trucks’ ‘Be Part of the Story’ launch event for the new range at Millbrook Proving Ground, 14-18 October 2013, where he was able to put the new truck through its paces around the two mile banked high speed circle and hill route.

Clive Cowern comments: “The Range T drives really well and the gearbox is superb, which is what we were looking for. The cab is very well laid out with a good floor so I can’t see any of

our drivers complaining, which is important because driver appeal is a key factor for us. Fuel economy and reliability are critical to our operation, so we are looking forward to running the Range Ts against Euro 5 Scanias to put them to the test. If the Range Ts perform to expectation we will be ordering more.”

A good relationship with local dealer Renault Trucks Midlands also helped secure the deal. Clive Cowern continues: “We have run Renault trucks in the past and get on well with the team there, which always helps.”

Clive Cowern Transport Services was established in 1985 and provides a comprehensive road haulage, secure storage and pallet distribution service 24 hours a day, 7 days a week, operating in the UK, Europe and throughout the rest of the world. Strategically located in the market town of Bridgnorth, Shropshire, with quick and easy access to major transport routes and motorways around the West Midlands, the company offers an unrivalled service to customers based on a commitment to deliver with excellence. Clive Cowern Transport’s mixed fleet can accommodate loads of all sizes, from 35 cwt pickups to 44 tonne articulated trucks with single and double-deck trailers, some of which are contracted on a long term basis to H L Smith Transmissions and Mann Filters and carry their livery.